This is the first in a 4-part series about The Big Magical Process of Making Words Happen (According to This Author).

Writing a novel is an intricate, complex machine of moving parts and pieces, tasks and goals. Of the entire complex machine, to my mind there are three tasks that stand out as extraordinarily important… the foundations, the tenets, of the entire process: Setting, Characters, and Plot.

A larger tenet looms yet higher, almost obscured from view because of its all-encompassing enormity, seldom in the limelight, often taken for granted, rarely recognized for just how vital it is. I call it Spark. (NOT the Allspark, fellow geeks… although… now that I’ve said it…) 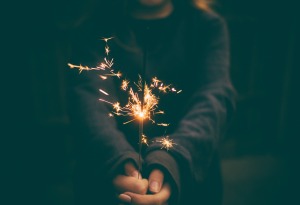 Before we can delve into any one of Big Three, it is important to think about what sparks the movement within the machine in the first place. Think of the setting/characters/plot combo as the How of your novel… the (All)Spark is the Why.

In other words… where do the ideas come from?

After that lead-in and build-up, I’m afraid right now I have a somewhat disappointing answer to this question. During a lunchtime conversation the other day, a colleague asked me (innocently) how I come up with ideas for the stories I write. Turns out, I had an obnoxiously difficult time answering. The experience was rough for him, too, I’m sure. Emotionally harrowing for me, indeed. After a few rambling half-hearted expository vocal blerps from out of my brain-mouth connection, ultimately my coworker walked away from the conversation with… nothing resembling a true answer.

Since then, I’ve been wondering about my process, trying to pinpoint where they come from, those elusive little sparks that ignite ideas. Some are inspired from life experiences, sure. Some, less so (I’ve never been a post-apocalyptic pirate revolutionary, nor have I ever manipulated magnetic and kinetic forces via my hands, as two recent examples). As a fantasy/speculative fiction writer, I am firmly of the belief that you do not have to write what you know. You are not limited to the scope of your own personal experiences. There are some fantasy thought sprouts that can only be grown from the fertile soil of pure imagination, with a strong beam of sunlit possibility. (Oof. I’m not going to delete that metaphor.)

I spend most of my extra time exercising my imagination. I’m drawn to the challenge of taking fantastical and impossible concepts and turning them into relatable, probable occurrences within the scope of their universes. In order to do so, context is everything. (More on this in Part 2.)

The best I can come up with, to explain what happens in my head, is that once in awhile I see or hear something that clicks (connects, fires a neuron, sings a siren song… pick your preferred analogy). When it clicks, I am drawn to a weird little fuzzy place in my brain where I witness the idea materialize from the ether, and watch as it sort of crosses some sort of imagination bridge, growing more substantive along the way, and becomes a story.

More questions remain: How do I coax those ideas forward? How do I pick and choose which idea to coax forward? Why do some cross over into Novel Land, where others stay in the gray and abstract Land of the Unrealized?

And now there are too many weird analogies in this post.

But along those lines, I can’t be sure I even know how I recognize the ideas, when they’re little fledglings, forlorn half-formed storylings. I’ve spent So. Much. Time. trying to hash this out. With only a few paragraphs left in this post, you may yet be completely confused. I am, too. But as difficult as all of this has been to articulate, I’m hopeful the answers might emerge from this miniseries of blog posts, answers that could hopefully address how the Spark manifests itself in my process, within the context of the stories I’m writing right now. I’ll draw examples from those stories when relevant.

And so, this is an experiment of sorts, dear readers. A real-time study of one writer figuring out The Big Magical Process of Making Words Happen, According to Herself. But what I’d love is to foster conversation (and further introspection) about what our own processes entail, what the Spark demands of each of us. So please, please, PLEASE sound off in the comments if you have anything to add!

Now, on to the Big Three: Setting, Characters, and Plot.

Part 2: A Universe in My Head (or: The Intricacies of World-Building)

Part 3: Writing Them to Life (or: The Complexity of Character)